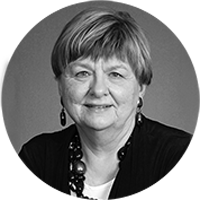 Lorrie Graaf has spent most of her career working in public health at the federal, state, and local levels, and is currently a Consultant for the National Association of Chronic Disease Directors, where she helps support an initiative related to increasing colorectal cancer screening rates.

Lorrie began her work in public health at a county-based public health department. Before her role as a Consultant, Lorrie worked for the American Cancer Society, where she initially served as a director of health care partnerships and later as the Comprehensive Cancer Control Program Manager at the global headquarters in Atlanta. Prior to that, she was a regional public health advisor with the Centers for Disease Control and Prevention, Division of Cancer Prevention and Control, where she was responsible for working with comprehensive cancer control programs in eight states and two tribes.

Lorrie also worked for the Iowa Department of Public Health, where she served as the Chief of the Bureau of Health Promotion and Substance Abuse Prevention. During that time, she was the director of eight primary prevention and chronic disease programs. In addition, she was the state Chronic Disease Director and served on the NACDD Board of Directors.